Do you dare challenge Lavos? Do you dare to change what has been set in motion?

Several months ago, I began work on a JavaScript-powered RPG engine, named CT (for now). I started it with the goal of learning about the challenges of game design, and to figure out how the heck those old masters of the 16-bit era did things. Frankly, I think the sprites from Chrono Trigger have a lot more character than the typical 3D environment seen today. It’s really about your imagination, and the sprites give it room. Look at the original Pokemon. The battle sprites were literally ugly, but I didn’t care, because in my head was where the real battle was.

CT taught me a few things, and even in it’s unfinished state, I’m proud to say I worked on it. It has asynchronous asset loading, map scrolling, animated sprites, menu-driven events, running, point-in-polygon collision detection (the walkable area is defined by a polygon), map switching, pixel-based text rendering engine, and some other tricks too. 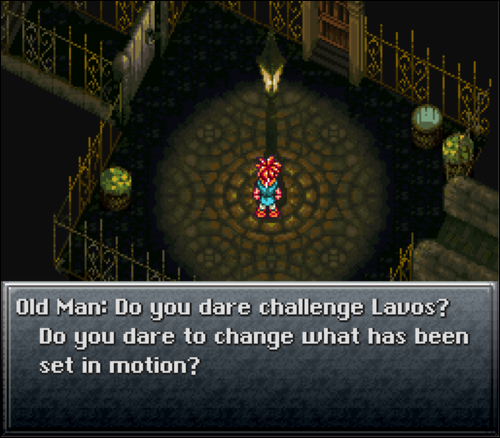 Some things I’d do differently if I ever decide to continue working on it:

If you’ve noticed a theme here, good job! JavaScript is event-driven. I should have made the engine the same. That is, everything is triggered by an event. For example, rather than there being a main game loop that checks for input, have input handlers. The player presses the right arrow: move the internal representation of the character right. The framerate timer ticks: render a frame to the screen. An event has completed: perform it’s callback. I could go on.

Moral of the story: use the language’s strengths as that.

If anyone has questions or comments on the engine, I welcome the dialog. The source code is on github, where there is more information on features and what you can do.